The initial interest in China was driven by the large market opportunity and the need to improve therapeutics available for Chinese patients, and many of the interest was and still in oncology. Over time, however, this idea has morphed with many Chinese biotechs having their eye on being the next multinational company (MNC), but with Chinese origination (Beigene, C-Stone, Innovent, Zai Lab as the leaders).  Many of the early deals were driven by commercialization of innovative globally approved therapeutics in China leading to in-licensing China rights.  Gradually there was a global shift in perception of China biotechs with recognition of China R&D value, leading to key deals involving MNCs licensing China-produced assets (PD-1/L1 antibodies to CD47 antibody).  Most recently, even biotechs got in on the action with Seagen tapping Remegen’s HER2 antibody drug conjugate (ADC) asset with $200M upfront and deal value up to $1.4B.  Although the interest is still on validated targets, China biotechs are starting to take more risks in their portfolio with first-in-class or potential best-in-class approaches to a target. 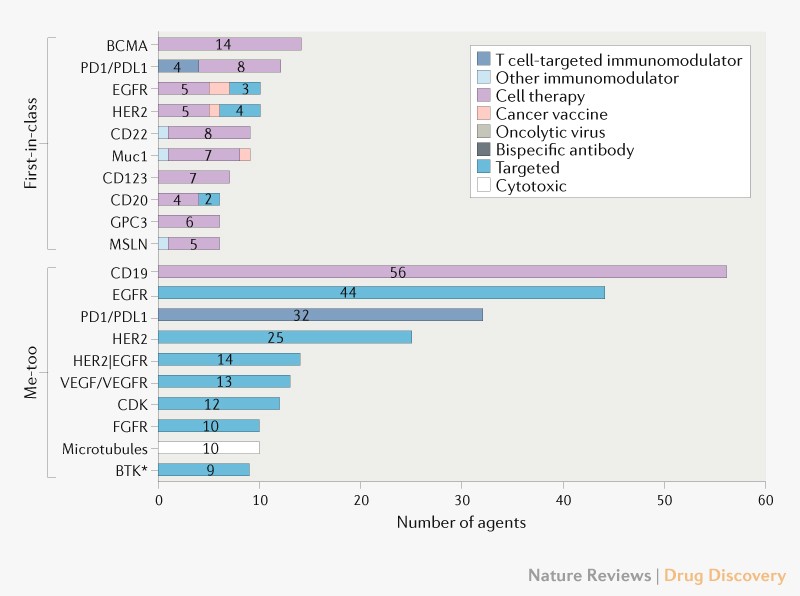 Top 10 oncology targets of first-in-class and me-too agents. Drugs either engaged a single target (such as BCMA) or multiple targets, indicated by a “|” symbol (such as HER2|EGFR). *There were also nine agents for HFGR and PI3K. Nature Reviews Drug Discovery 20, 15-16 (2021)

The Zai Lab deal with Macrogrenics ($55M upfront/equity and $2B deal value) and Beigene’s deals with Strand Therapeutics and Boston Immune Technologies & Therapeutics (BITT) are the best examples of backfilling their portfolio with assets/technology to cover the early stage with riskier targets/platforms.

As we reach 2H2021, we expect more licensing deals originating from Chinese biotechs with many more deals involving MNCs.  In fact, as seen by the recent deal between Innovent and Ascentage to co-commercialize and develop in China, it would not be surprising if there are more China biotechs joining forces to tackle development and commercialization.

US and EU biopharma innovators should, if they aren’t already, include China biopharma as partnering targets given the increasing appetite in China to in-license pre-commercial assets.  China biopharma should also better understand the global trends to help them best position their programs for both global development efforts and BD partnering activities.

US and EU biopharma innovators should, if they aren’t already, include China biopharma as partnering targets given the increasing appetite in China to in-license pre-commercial assets.